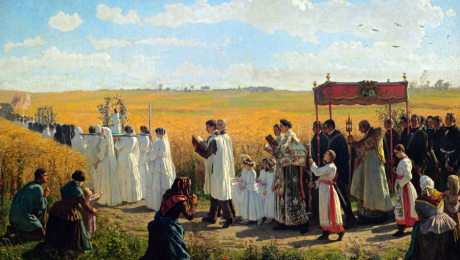 History of the Ember Days

The Ember Days, which were historically kept four times during the liturgical year, have a venerable history. Here is the explanation from the 1917 Catholic Encyclopedia.

The purpose of their introduction, besides the general one intended by all prayer and fasting, was to thank God for the gifts of nature, to teach men to make use of them in moderation, and to assist the needy. The immediate occasion was the practice of the heathens of Rome. The Romans were originally given to agriculture, and their native gods belonged to the same class. At the beginning of the time for seeding and harvesting religious ceremonies were performed to implore the help of their deities: in June for a bountiful harvest, in September for a rich vintage (grapes/wine), and in December for the seeding; hence their feriae sementivae, feriae messis, and feri vindimiales. The Church, when converting heathen nations, has always tried to sanctify any practices which could be utilized for a good purpose. At first the Church in Rome had fasts in June, September, and December; the exact days were not fixed but were announced by the priests. The “Liber Pontificalis” ascribes to Pope Callistus (217-222) a law ordering the fast, but probably it is older. Leo the Great (440-461) considers it an Apostolic institution. When the fourth season was added cannot be ascertained, but Gelasius (492-496) speaks of all four. This pope also permitted the conferring of priesthood and deaconship on the Saturdays of ember week–these were formerly given only at Easter. Before Gelasius the ember days were known only in Rome, but after his time their observance spread. They were brought into England by St. Augustine; into Gaul and Germany by the Carlovingians. Spain adopted them with the Roman Liturgy in the eleventh century. They were introduced by St. Charles Borromeo into Milan. The Eastern Church does not know them. The present Roman Missal, in the formulary for the Ember days, retains in part the old practice of lessons from Scripture in addition to the ordinary two: for the Wednesdays three, for the Saturdays six, and seven for the Saturday in December. Some of these lessons contain promises of a bountiful harvest for those that serve God.

Catholics who have access to the traditional liturgy outside of Sundays should make a special point to assist at Mass on Wednesday, Friday, and Saturday of this week. In addition to keeping the fasting and abstinence prescriptions on these days, the faithful should be attentive to the special collects and readings that are assigned on these days. Here, for instance, are the Collects from Wednesday, which properly capture the spirit of these days.

May our frailty, we beseech Thee, O Lord, find support in the help of Thy mercy; so that what is marred by its own nature may be restored by Thy grace.

O Lord, we beseech Thee, grant to Thy praying household that, as they fast from bodily food, they may also abstain mentally from sin.